For more than 70 years, Meeting Street has pushed to be a national leader in the development and education of children o fall ages and needs.

And the organization, with campuses in Providence, Dartmouth, and New Bedford, continues to grow.

Meeting Street is currently constructing a two-story, 28,000-square-foot addition on the Providence campus. The building, expected to be finished in June, will be a new wing for The Carter School - which serves children ages 14-22 with special needs - with additional classrooms and other elements.

Meeting Street is also looking to create more vocational experiences at The Carter School for students, according to Mark Marcantano, the nonprofit's chief operating officer.

"They will be experiences where they could run a business. You've seen in town where [studnets with special needs] had the opportunity to work in flower shops or chocolate stores or dry cleaners, where they can have some more work experience, Marcantano said, noting that specifics on what those experiences will be are still being discussed.

Marcantano said new R.I. Department of Education Commissioner Angelica Infante-Green will visit Meeting Street April 30 to "get to know" the nonprofit's programs and learn more about universal pre-K, an initiative Gov. Gina M. Raimondo is pushing for. Meeting Street has two classrooms suited for pre-K and is "interested in doing more in keeping with the governor's agenda," Marcantano said.

Over the last five years, Meeting Street has received close to $5.4 million in donations via the telethon. 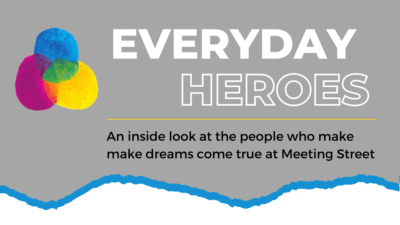